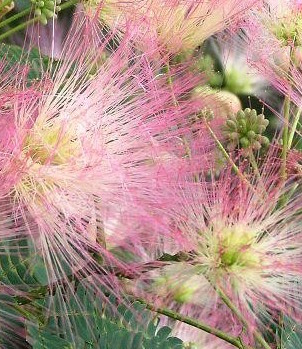 Albizia julibrissin is one of my favorite tree medicines. I most often make a tincture of the blooms, leaves/stems and inner bark of limbs. I have also infused the blooms in honey. Many people dry the blooms and the inner bark for infusions. According to the American Journal of Essential Oils and Natural Products, “the presence of linalool, trans-linalool oxide, methyl salicylate, and eugenol are likely responsible for the fragrant odor of silktree blossoms.”

Mimosa is in the legume family (Fabaceae), and is a nitrogen fixer. It has been used in Traditional Chinese Medicine for anxiety, depression, insomnia and stress, and is often called “the Tree of Happiness”. While I love this tree, I do not encourage people to plant it because of its invasive nature; IPAMS says, “Mimosa is listed as a significant or severe threat in several southeastern US states, including Tennessee in the MidSouth region.” I do, however, feel that we can develop right relationship with this tree and learn to utilize its medicine.

Mimosa is often used for grief after any kind of loss. I blend mimosa with hawthorn leaves, flowers and blooms, motherwort, and wild roses to help move through deep sadness.

East West School of Planetary Herbology has some wonderful information on Mimosa.  Albizzia: The Tree of Happiness.

According to Planetary Herbals:  “Albizia was traditionally used to ‘calm the spirit’ and relieve emotional constraint when associated with bad temper, bad mood, sadness, occasional sleeplessness, irritability and poor memory. It was believed to be especially useful for anyone experiencing profound heart-breaking loss.”

Another source that I can no longer remember mentioned that Mimosa could be used for “breathlessness.”  I love how one source called Mimosa tincture a “Spirit tonic”… but I’m not so keen on seeing it called “Chinese Herbal Prozac.”

I use Mimosa in my Anxiety Ease blend (which includes a few other nervines along with milky oats to help nourish and support the nervous system). Mimosa is also used for pain and inflammation.  I have not seen much information on the whys and hows of this, but here is some TCM info on Mimosa that I found from the Herbal Shop.

I would really love to see more people take advantage of Albizia’s healing properties; especially since it’s so abundant (read: invasive) in this area.  I have read that people who are already taking medication for depression or anxiety should talk to their doctors before taking any herbal preparation that would alter any results, so please take responsibility for your personal health if you are considering using this tree medicinally.  Also, if you are pregnant or wish to become pregnant, check with your doctor before using this tincture; it is said to have strong blood moving properties.

Mimosa blossom, bark and leaf tincture has been an amazing ally for me. When I first tasted it, I was slightly overwhelmed with the “Ohmygawd-I-Just-Sprayed-Perfume-in-my-mouth” taste, but then I got used to it. Originally I made a tincture of just the blossoms… so when I mixed the bark/leaf tincture with the blossom tincture, it tasted much better. Both tinctures *and the blend of the two* worked very well to treat grief, mild depression and lingering sadness over loss.

Mimosa tincture is very helpful for me when I feel tightness in my stomach/solar plexus due to stress or anxiety. It has a calming effect on my respiratory diaphragm and I am able to take deeper breaths during stressful situations.

I’m finding that Mimosa is especially indicated for people who are stuck in a process; whether it’s a grief process that’s going nowhere or a biological process that has not been properly completed; Mimosa helps lift one’s spirit and perspective so that movement can begin again.

Jon Keyes has a great writeup on Albizia at Hearthside Healing

I have also noticed that when only the blooms are used, people who can become spaced out easily (as well as people who are super comfortable with being in the sky with diamonds), tend to report a feeling of “floating away” when using the tincture of the blossoms. Based on that feedback, I chose to blend the blooms with inner bark, stems and leaves and have used that tincture with very good results. It’s grounding and uplifting at the same time.

Another point I would like to make here (which may end up being a blog post all its own) is that when someone is experiencing the grief process or if someone is dealing with loss, I believe it’s very important to fully have those experiences. I don’t suggest we use an herbal or other medicine to keep us from feeling our feelings. There are many great herbal allies who support us while we have our times of grief and loss.  However, when a person feels the need to move through the grief or move on from loss and is unable to do so, Albizia blended with other supportive herbs can help to raise one’s perspective and spirit in order to begin moving through his/her process.

Enjoy working with Mimosa. My next adventures with this tree will be making a flower essence and experimenting with it in an insomnia blend.

I have been working with Mimosa in situations of insomnia, irritability due to overwork, mental strain, or other stressors. If I find myself running on fumes or feeling like I have overtaxed my mind and can’t turn it off and rest, I turn to mimosa along with a few other allies like skullcap and passionflower. For the record, I also take much needed time to relax, get extra rest, drink lots of water, and sit quietly in my yard to restore my nervous system. I have to be careful not to overtax my system and then use mimosa as a band aid so I can keep going. #graduateschool

Last year a Mimosa came to live with us (Surprise!), and this year she grew large enough to bloom. Earlier this spring, I heard Jack tell the kids to cut the Mimosa down. Jon and Joylynn, because they are brilliant, listened to me when I pulled rank on Mr. Bailey.

Jack: Why won’t you let the kids cut that tree down?

Me: Because this is an important tree. I will be able to help lots of people with this tree.

Me: At least tell me before you cut it down so my friends and I can make medicine with it, okay?

Later in the year, our Mimosa began to make flowers. I would go out every morning and sing to the tree and harvest blooms and a few leaves.

Jack: Why do you keep taking the blooms away? I’d like to enjoy a few of them if you don’t mind.

I think we’ll be keeping the Mimosa tree, and I am sure we’ll have plenty of babies next year.

I am an Integrative CranioSacral therapist, Earth Medicine practitioner, and ceremonial herbalist, specializing in integrative mind-body therapies, and I work and teach at the Holistic Center in Tupelo, MS. View all posts by Dana Tate Bailey